Extreme levels of rainfall are expected in this part of Gujarat

wever, light rain is likely in Ahmedabad city. While light to moderate rainfall is forecast in North Gujarat. 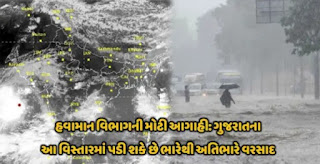 Kutch, on the other hand, is likely to receive normal rainfall. Importantly, the last monsoon is active. But the meteorological department has forecast normal rainfall in Kutch.

The administration has become alert regarding the rain. Control rooms have been started in all the taluka centers of the district. While the district collector has canceled the leave of all government employees.

The meteorological department has also forecast fishermen not to plow the sea for the next two days.

According to the meteorological department, heavy to very heavy rains are likely in Gujarat, Saurashtra, South Gujarat and North Gujarat in the near future, as well as coastal areas.

Dwarka has been receiving heavy rains for the last two days, which has led to waterlogging. According to the meteorological department, heavy rains are still expected.

At the same time, fishermen have been instructed not to plow the sea. Winds can blow at speeds of 45 to 55 along the coast of Dwarka.